This is the third single from “The Bear And Other Stories“ 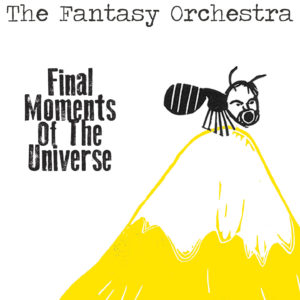 Here s a very special song by the shamanic folk pariah Richard Dawson, a guitarist / singer whose performance begs transcription. His songs already sound like symphonies when he plays them solo. We don’t expect to capture that subtlety but we do hope to convey the brazen glory of RD’s masterpiece. Also, a shout-out to Bristol FO trombonist Sam Hayler for an excellent vocal performance and to harpist Louise Schwartz because she’s great.

The Bear And Other Stories was recorded in two days, one in Bristol, the other in Paris and features
music by Sun Ra, Jimi Hendrix, Bristol artists Paul Bradley and Jamie Harrison; New
York alt-noise group Buke and Gase and folk force of nature Richard Dawson. Some of
the tunes were composed in the 50’s, others were written just a few years ago.
Who Are The Fantasy Orchestra?
The Fantasy Orchestra is an open-to-all community orchestra and choir based in Bristol
and Paris since 2012. They began life as an Ennio Morricone covers band and have
since developed full sets David Bowie, Leonard Cohen, Jimi Hendrix, and most recently,
Radiohead. There’s more than two hundred songs in their repertoire and their mission is
World Peace One Note At A Time. They meet every week and go on a bicycle tour every
summer.
Jesse says
“The point of the fantasy Orchestra is bring together a diverse group of
people – any group really and having them play some epic music. The magic is plainly
seen on their faces as they play it and in the response of the audiences wherever we
go.”
​
Abby Tsype
(Paris singer and violinist) says “there’s a kind of cloud of cosmic fairy dust
that surrounds the orchestra and whisks it off to really unlikely places where most
members wouldn’t have dreamed of playing, such as major festivals in France and the
UK or a prime time television show in India! “
Liberation, France dec 2019
This grand Franco-British orchestra covers both historical classics and avant-garde pop as if the future of the planet depended on it…  [the orchestra]may be more than a little touched by madness, it also has its head screwed tightly on its 320 shoulders.
Tony Benjamin (Bristol 24:7) march 2019
“All in all it was a splendidly eclectic range of music that entertained and enlightened throughout, the overall sense of playful enjoyment never getting in the way of quite challenging musical and lyrical ideas. For my taste it was a homegrown moment that drew the best from the Fantasy Orchestra – Brackish guitarist Neil Smith’s time-shifting cinematic Kurtle with its scattered moments of individual playing not so much solos as glimmerings. It captured the integrity of the project, drawing out the likeminded unity of a ragtag ensemble happily gathered in its own left field and welcoming us to join them.”

We play hits from round the world and round the genre. We play Bohemian Rhapsody, Moondog, Dance Of The Knights, Mehbooba and Anna Meredith. We play Radiohead. We get out the glitter, greasepaint, our grooviest garb and make a lot of cacophonous noise …usually fun to see!