Tickets: £5 on the door; children £2 or donation 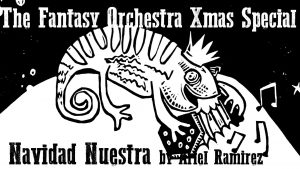 The Fantasy Orchestra and choir will be performing Navidad Nuestra by Ariel Ramirez, a nativity suite, set in the Argentinian countryside and sung in Spanish. This to be followed by a selection of other Xmas tunes from around the world plus winter-warmers and glorious seasonally appropriate oeuvres.

What: We’re playing at a party!

Please note this is a private event and not open to the general public. The orchestra is available for private events, please get in touch if you’re interested 🙂

What: A celebration of the Cube cinema’s 20th anniversary!

When: Saturday 20th October, from around 8pm

Where: Kings Square / Outside the Cube

Tickets: See here for tickets for the main event

The Fantasy Orchestra will be joining in celebrations for the wonderful Cube Microplex Cinema’s 20th birthday. Expect to see us outside the cinema playing a small selection of somehow appropriate tunes. See the Cube’s facebook event for more details.

What: An evening of music by Ennio Morricone

Where:  All Hallows Hall, Easton

The Fantasy Orchestra are going back to their roots with a celebration of the film music of Spaghetti-Western composer Ennio Morricone – featuring such delights as The Good, The Bad and the Ugly and the beautiful Ecstasy of Gold.

More information can be found on Headfirst Bristol

Here are a collection of performances of Morricone’s music from over the years:

What: A Leonard Cohen tribute concert

The Fantasy Orchestra is coming to Cheltenham Literature Festival for another of our celebrated tributes to the life and music of Leonard Cohen. Featuring a range of Cohen’s most popular tunes performed by the orchestra with a range of guest singers.

Here is a clip of our last Leonard Cohen gig at the Lantern earlier this year:

What: A lovely village festival

We’ll be performing in St Luke and St Andrew’s Church in Priston at 5pm. The set will feature special guest singer Djanan Turnan!

Priston Festival is a free festival in the village of Priston, near Bath, featuring a number of in- and out-door stages around the village.

Here is a video from our appearance last year, performing I am the Walrus:

What: We’re busking by the Aladdin Sane Wallace on the 24th August! The Wapping Wharf area forms part of the Gromit Unleashed 2 trail , which consists of dozens of sculptures from Aardman’s famous Wallace and Gromit series dotted around the city in aid of the Grand Appeal.

Artist Carys Ink’s Bowie-themed Space Oddi-tea Wallace sculpture is located at Wapping Wharf until September 2 and is the inspiration behind both of the Bowie music fundraiser.

Bristol’s very own Fantasy Orchestra will be performing a selection of Bowie’s early songs on August 24, in keeping with the Wallace sculpture’s Aladdin Sane lightning bolt.

Here is a taste of what to expect – the orchestra’s rendition of Life on Mars from our recent Valley Fest appearance:

The performance will take place at 6pm on August 24 next to the sculpture, in front of Portside Gallery and Brothers We Stand.