Two days in the recording and nearly two years in the finishing we’re proud to present The Fantasy Orchestra’s first album.

This record documents the huge community of talent, love, dedication and positive
energy created by members of the orchestra, and about 160 of them, mostly amateur
musicians and singers, are on the record!
The track list represents
a Fantasy mix of well-known and lesser-known composers
such as Bristol-based master guitarists Paul Bradley and Jamie Harrison, whose song,
The Bear, gives the album its title.
Side A
​1: Flow (Disasterpeace)
2: The Bear (Jamie Harrison)
3: Split Like A Lip, No Blood On The Beard  (Buke and Gase)
4: Third Stone from the Sun (Jimi Hendrix)
5: Love in Outerspace (Sun Ra)
Side B
6: One of my Favourite Weathers (Paul Bradley)
7: The Empty Boat (Caetano Veloso)
8: Kurtle (The Liftmen)
9: October (Sun Ra)
10: One Rainy Wish (Jimi Hendrix)
11: Final Moments of the Universe (Richard Dawson)

The album was recorded in two days, one in Bristol, the other in Paris and features
music by Sun Ra, Jimi Hendrix, Bristol artists Paul Bradley and Jamie Harrison; New
York alt-noise group Buke and Gase and folk force of nature Richard Dawson. Some of
the tunes were composed in the 50’s, others were written just a few years ago.
Who Are The Fantasy Orchestra?
The Fantasy Orchestra is an open-to-all community orchestra and choir based in Bristol
and Paris since 2012. They began life as an Ennio Morricone covers band and have
since developed full sets David Bowie, Leonard Cohen, Jimi Hendrix, and most recently,
Radiohead. There’s more than two hundred songs in their repertoire and their mission is
World Peace One Note At A Time. They meet every week and go on a bicycle tour every
summer.
Jesse says
“The point of the fantasy Orchestra is bring together a diverse group of
people – any group really and having them play some epic music. The magic is plainly
seen on their faces as they play it and in the response of the audiences wherever we
go.”
​
Abby Tsype
(Paris singer and violinist) says “there’s a kind of cloud of cosmic fairy dust
that surrounds the orchestra and whisks it off to really unlikely places where most
members wouldn’t have dreamed of playing, such as major festivals in France and the
UK or a prime time television show in India! “
Tony Benjamin (Bristol 24:7) march 2019
“All in all it was a splendidly eclectic range of music that entertained and enlightened throughout, the overall sense of playful enjoyment never getting in the way of quite challenging musical and lyrical ideas. For my taste it was a homegrown moment that drew the best from the Fantasy Orchestra – Brackish guitarist Neil Smith’s time-shifting cinematic Kurtle with its scattered moments of individual playing not so much solos as glimmerings. It captured the integrity of the project, drawing out the likeminded unity of a ragtag ensemble happily gathered in its own left field and welcoming us to join them.”
Liberation, France dec 2019
This grand Franco-British orchestra covers both historical classics and avant-garde pop as if the future of the planet depended on it…  [the orchestra]may be more than a little touched by madness, it also has its head screwed tightly on its 320 shoulders.

1. Flow – Disasterpeace (P)
I discovered Disasterpeace through the soundtrack he made for the 2014 film “It Follows”. On hearing the album “Fez” right away thought the tunes would sound great arranged for the orchestra. Doubly satisfying as the original music seems to have been composed on a laptop, ensuring that our version would be completely different from the original. Apart from that, it’s pretty much straight transcription.

2. The Bear – Jamie Harrison (B)
Composer of our title track, Jamie Harrison is part of what a few of us back home like to call the Great Ragtime Renaissance (along with Richard Dawson, Andy Skellam and others). He’s a meticulous composer with a Charles Portis-esque gimlet eye for graphic (design) imagery.

3. Split Like A Lip… Buke And Gase (B)
Buke and Gase are the incredible New York duo of Arone Dyer and Aron Sanchez. They play the handmade instruments the band is named after. Again, it was such fun to expand an arrangement played by a duo for orchestra and choir. This tune is a massive challenge for us to play as it changes time signature repeatedly from 3/4 to 12/8. Lead vocals by Paris Fantasy violinist and occasional choir leader, Abby Tsype.

4. Third Stone From The Sun – Jimi Hendrix (P)
This Hendrix instrumental (which He never played live) has become a FO staple. It’s a great opener with a fab melody, lots of energy and a bit of an improvised section. The choir sing what Jimi speaks on the original – you can find a fun version of that on the internet, with Jimi and Chas Chandler giggling/ laying down some space conversation.

5. Love In Outer Space – Sun Ra (P)
Our source version  can be found on 1970’s “Night Of The Purple Moon” album  which was performed by a quartet of rocksichord (a special Sun Ra instrument), bass clarinet, bass and drums with a vocal version (by David Henderson) released later. We transcribed the melody instruments and added a choir part. It’s a special feeling for our amateur orchestra to recreate the flow of such cosmic musicians . I hope the Arkestra get to hear it. Rasha Shaheen (also a Liftman, see below) added lead vocals.

6. One Of My Favourite Weathers – Paul Bradley (B)
Paul B is one of Bristol’s finest musicians and guitarists. This song comes from the wholly improvised 2015 album “Banish Cherish” and is sung here by a very special guest (who also plays some lead guitar on the end), though we haven’t told Paul yet to keep it as a surprise when the album comes out!
You can catch Paul perform solo or with various bands including The Organelles and Three Cane Whale.

7. The Empty Boat – Caetano Veloso (P)
Our version doesn’t differ much from Caetano’s mind-blowing 1969 original which features an inspired arrangement by Rogério Duprat. We transcribed that and added choir and everyone else . I share lead vocals with Kate Stables.

8. Kurtle – The Liftmen (B)
This piece was composed by superb guitarist Neil Smith for his group the Liftmen around 2003. Check out the rest of their stuff especially Backwards. You can catch Neil playing live in one of his many Bristol groups including The Brackish, Slate Trio, Hélélé and This Is The Kit

9. October – Sun Ra (P)
Sun Ra always delights with his mixture of chaos and order and this one sounds like a foggy 1950’s B-movie soundtrack. We added strings and choir. It was only when transcribing Sun Ra’s piano part that we realised the tune uses quite standard jazz changes and an AABA structure – it’s the wild harmonies and sub-melodys that bring the magic.

10. One Rainy Wish – Jimi Hendrix (P)
It’s a long time ambition of ours to record a whole album of Hendrix covers. We started with these as they’re tunes Jimi H never performed live so it seemed only fair that the songs should get to live a little on the live music scene. Lead vocal is by the amazing Frankie Cozzolino from the Paris Fantasy Orchestra whose performances are always a highlight.

11. Final Moments of the Universe – Richard Dawson (P)
Here s a very special song by the shamanic folk pariah Richard Dawson, a guitarist / singer whose performance begs transcription. His songs already sound like symphonies when he plays them solo. We don’t expect to capture that subtlety but we do hope to convey the brazen glory of RD’s masterpiece. Also, a shout-out to Bristol FO trombonist Sam Hayler for an excellent vocal performance and to harpist Louise Schwartz because she’s great.

We play hits from round the world and round the genre. We play Bohemian Rhapsody, Moondog, Dance Of The Knights, Mehbooba and Anna Meredith. We play Radiohead. We get out the glitter, greasepaint, our grooviest garb and make a lot of cacophonous noise …usually fun to see!

Press for The Bear and Other /Stories 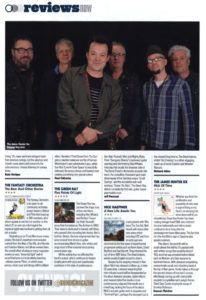 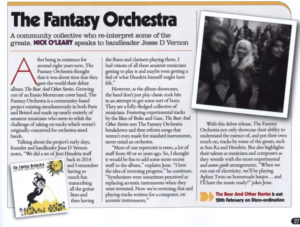